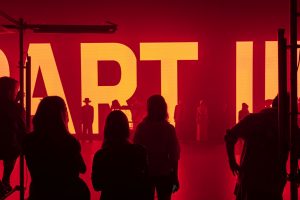 The Lithuanian Theater Showcase of the Sirenos Theatre Festival, canceled last year due to the pandemic, will this year invite the audience to a live meeting and present performances selected by  curators. The program includes the most relevant and interesting works of recent theater seasons by famous theatre directors as well as young ones, who are just starting their careers in theater. Before the pandemic, the Lithuanian showcase would attract up to 80 foreign theatre experts.

This year, the Lithuanian theater showcase is curated by theatrologists, theater critics Rimgailė Renevytė and Ieva Tumanovičiūtė. According to the curators, ‘quite a few performances selected for last year’s festival didn’t make it to the program of SIRENOS 2021, a double or reflection of Sirenos 2020. Thus, the theme of the festival “Silence” and its motto “Untold Stories Disappear” have become a kind of preconceived reality, when due to technical or artistic (im)possibilities a number of performances created last year were lost in time and became stories untold.’ On September 22-26, 2021, 13 works of the Lithuanian Showcase will be presented to theatre experts.

The curators of the Lithuanian Theatre Showcase have divided it into four categories: “Masters”, “Experiments”, “Interdisciplinary” and “Young Voices.” The masters’ program will feature two plays directed by Oskaras Koršunovas: A MAN FROM PODOLSK, which raises questions about reality, and the latest work of OKT / Vilnius City Theatre, OTHELLO. This is the seventh time Koršunovas has directed a play by Shakespeare.

Together with the Klaipėda Youth Theater, Hungarian theatre master, director Árpád Shilling will present his new project STUCK – woven from family history, a cultural overview of the past twenty-five years, and the fight against oppression and helplessness.

The play AUSTERLITZ, a production of the Lithuanian State Youth Theater directed by the legendary Polish director Krystian Lupa, will add to the international atmosphere in the “Masters” category. It is an epic meditation on the trauma of the Holocaust and its effect on the fate of an individual.

Polish director Lukasz Twarkowski has created an experimental theater experience – the performance REPUBLIC (Lithuanian National Drama Theater). An out-of-the-box event will allow the spectators to immerse in the life of a commune dancing to rave music, and to experience a gamut of emotions felt by the commune in one evening.

This year, the Lithuanian theater showcase will also feature two experiments by actors debuting as directors: MONGOLIA (OKT/Vilnius City Theater), a play by Darius Gumauskas analyzing what it is like for people with Down syndrome to live in our society and project LAISVĖ directed by Dainius Gavenonis (production of Public Enterprise “Darbininkai”). The play aims to talk about the limits of freedom and our responsibility towards ourselves and others within the concept of freedom.

RADVILA DARIUS, VYTAUTO (Production of Operomania) by Karolis Kaupinis – an interdisciplinary project, a lively dialogue between live music played by four instrumentalists and video excerpts from LRT archives, reflecting the incredible nineties, the early period of our independence, with love and humor.

Greta Grinevičiūtė’s work – A DANCE FOR AN OBJECT AND CHILD (Art and Science Laboratory) – erasing the boundaries of theater and dance, is also part of the program. The creative team will raise questions about things our society takes for granted, such as having children, expecting children, inability to have children or unwillingness to have them.

In her performance MAN FROM FISH (Lithuanian State Youth Theater), director Eglė Švedkauskaitė will invite the audience to a space where time is stretched out, a place filled with anxiety: to a house faced with an oppressive reality considered by its naïve characters to be solid enough.

The last in the triad of young theatre voices – director Antanas Obcarskas and his work ALISA (Lithuanian National Drama Theater). The play will tell the story of the search for justice: the present claims – justice is a must for everyone and against everyone, but law and order are slow in establishing justice…

In addition to the international and Lithuanian theater programs, the visitors of SIRENOS will be invited to an integral part of the festival – SIRENOS CLUB, the program of which will be announced in August.