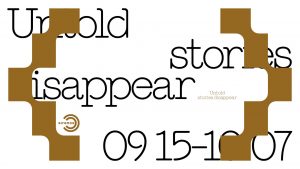 This year, the theatre festival Sirenos will open in an new and playful way – with a performance/ bicycle ride around Vilnius Old Town. Then it will invite the audience that is hungry for big theatre productions, to theatre halls, including the recently opened New Hall of the Lithuanian National Drama Theatre. As always, the festival programme will include the best Lithuanian theatre performances, works by foreign theatres as well as the festival’s club that will host concerts, discussions, theatrical walks, etc. The festival will take place from September 15 to October 7, 2021.

Usually, the whole programme of the festival revolves around one central theme. This year, the main theme will be the pause that the corona pandemic forced us to make when all the theatre stages were closed. We were forced to listen to the forms of silence surrounding us. According to Kristina Savickienė, the artistic director of the festival, “We lived in a break without a break, in silence without silence, in communication without communication, we created virtual theatre without theatre. Suppressed emotions, unspoken thoughts, unreleased premieres, untold stories began to accumulate. And according to Fernando Pessoa, stories we don’t tell anyone just disappear.”

This year, to reveal the theatrical stories of silence, the festival has chosen the slogan “Untold Stories Disappear”. From September 15 to October 7, the Sirenos Theatre Festival will invite the spectators, hungry for theatre and culture, to hear stories told by 5 foreign and 12 Lithuanian theatre companies.

The festival will open with an interactive project “Rider Spoke”, which will offer the audience an opportunity to experience the city in a different way. Participants of the ride curated by British theatre artists will try out an interactive game that will reveal the relationship between public and private spaces and the impact of communication offered by modern technology on the human experience in today’s world. According to the authors of the project, not only will the ride provide an opportunity to have a fresh look at familiar spaces, it will also allow the participants to break away from reality and establish an intimate dialogue with oneself. “Rider Spoke” will take place on September 15-23. The cycling tour will begin in the courtyard of the Arts Printing House.

Among the main highlights of the international programme – the performance “Pieces of a Woman” by the Hungarian director Kornél Mundruczó, also to be presented at this year’s Avignon Theatre Festival. It is an impressive portrait of women fighting for their right to make choices about their lives. Director Kornél Mundruczó and screenwriter Kata Weber created every character with great empathy – they do not judge or criticize any of the characters gathered around the family table. On September 27, the play will be performed in the New Hall of the Lithuanian National Drama Theatre.

In 1963, the philosopher and political theorist Hannah Arendt wrote the book “Eichmann in Jerusalem: A Report on the Banality of Evil”. It helped the Slovenian director Jernej Lorenci realize the need to address the problem of the banality of evil and its presence in every human being at a time when almost the whole of Europe is trying to put its anti-fascist roots in perspective. “Eichmann in Jerusalem” will run at the Lithuanian Russian Drama Theatre on September 28-29.

On October 6, in the Black Hall of the Arts Printing House, the international programme of the festival will close with the project “Flesh” – an aesthetic poem by the French artist and musician Frank Vigroux. In the performance inspired by books of the English writer J. G. Ballard and the car accident Frank Vigroux got into, Vigroux explores the moment following the shock. A short moment when time stops or expands.

This year the Lithuanian Theatre Showcase, which was cancelled last year due to the pandemic, will finally meet live audiences and present projects selected by twelve curators. The programme will include the most relevant and interesting works from recent theatre seasons directed by acclaimed as well as young theatre creators at the onset of their theatrical careers.

In addition to the rich theatre programme, theatregoers be invited to events at the festival’s club, offering a closer look at the current situation in the field of theatre art and its creators. Audio tours, which are becoming a new tradition of the festival, will not only help the audience discover stories that do not fit into the framework of a performance, but also to have a dialogue with the city of Vilnius.

The full festival programme will be announced in the beginning of July. More information about the events: www.sirenos.lt

You can buy tickets to the events of the international programme on Tiketa and Teatrai.lt ticket distribution platforms. Discounts apply when purchasing a festival pass. More information: