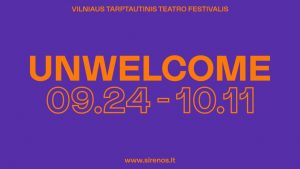 Having announced an open call to Lithuanian theatre makers in mid-May, Vilnius International Theatre Festival Sirenos has selected four projects to be presented by Lithuanian creators’ teams at this year’s edition.

In less than a month since the announcement of the open call, the festival received 99 applications, all of which were appraised by the Sirenos Art Council and the festival team based on the values of the festival, the presentation of the project idea, feasibility for presenting the works during the festival and the fulfilment of this year’s Sirenos theme, Unwelcome.

The festival Artistic Director Kristina Savickienė says that she was surprised by the diversity and creativity of the submissions in interpreting the festival’s theme and selecting the winners presented a real challenge. “It was so interesting to read the thoughts of artists from different generations and fields on the situation we find ourselves in, on the future of theatre as an art form and the social problems of today. Some authors sought a form of direct communication with the audience, others imagined theatre in nature or moving around the city, yet others explored the new media. In the general context, we looked for innovative projects that break out of the conventional theatre spaces. However, some of them have proved difficult to implement due to time and budget constraints. So our choice has been the unexpected, interesting, relevant, interdisciplinary projects.”

A play-performance-installation Emigrants, based on eponymous play by Slavomir Mrožek, will be presented in one of Vilnius’ balconies. Speaking about emigrants, director Darius Gumauskas draws on his close family experience: his thirteen cousins all work in construction in Germany, Ireland, England, Iceland, Sweden and Spain. As an actor, Darius Gumauskas says: “We should understand them best because we were the first to be taken out of circulation in the face of the pandemic and “fumigated” as being of no benefit to society.” The project’s team sets out to make it “more than a mere dialogue between an intellectual and a manual worker, an invitation to solidarity from us artists to politicians, entrepreneurs and other people.” The creative team also includes actors Giedrius Savickas, Marius Čižauskas, stage designer Marius Jacovskis, composer Vytautas Leistrumas, lighting designer Povilas Laurinaitis.

Expectations and Other Products is going to reveal the backstage of theatre art in surprising angles. It is an improvisational performance in an unexpected public space, a kiosk. The authors of the idea, scenographer and art photographer Liudas Parulskis and actress Eglė Mikulionytė, say they want to highlight the trends in changing consumption and post-quarantine social interaction in the modern cultural field and promise to create a non-aggressive aura of nostalgia.

Theatrical installation Night // Infiniteness // Interconnectedness will be developed by artists from three different fields: theatre director Naubertas Jasinskas, visual artist Tadas Černiauskas and composer Gintaras Sodeika. The project will be centered on the reflection of existing socio-cultural structures: routine and constantly recurring elements of human life. Where does it lead if you have no purpose in life? The authors will offer an opportunity to explore these structures and rethink the established everyday patterns in a several-hour-long installation with actors.

Tadas Montrimas‘ NO FAKE* is the fourth project selected by the festival jury. Immersive show-game NO FAKE* will explore the relationship between society and the individual in the reality of distorted information. The project’s creative team will analyse the phenomena of lies and manipulation that provoke destructive activity. The creative team consists of director Tadas Montrimas, stage and costume designer Kristina Voicechovskaja, playwright Virginija Rimkaitė.

Each project will be allocated a budget of up to €13,000. The festival aims to encourage Lithuanian theatre makers to develop new theatre ideas suitable for pandemic conditions that reflect the themes of today’s global social, political, psychological shifts and meet quarantine requirements for theatre in the form of small gatherings or virtual theatre.

During the summer, while the projects are being developed, the authors of the selected projects will have an opportunity to take part in mentorships, where they will receive guidance by renowned foreign theatre practitioners with experience in experimental theatre: Gob Squad, Blast Theory and Effetto Larsen.

This year’s festival will take place on 24 September – 10 October. It is provisioned to include a masterclass and a part of an artistic programme to be selected on a non-competitive basis.

Vilnius International Theatre Festival Sirenos is funded by the Lithuanian Council for Culture.