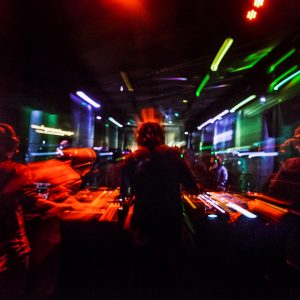 Untold stories disappear – this statement is made by this year’s Vilnius International Theatre Festival SIRENOS, seeking to reveal those theatrical stories silenced by the pandemic. This festival is an attempt to rescue stories that have not yet sunk into oblivion. What stories did these past two years bring us? What stories were pushed out? What should or shouldn’t we talk about right now, what is absolutely necessary or unnecessary to discuss? – says festival’s creative director Kristina Savickienė.

Just as it does every year, SIRENOS invites those seeking experiences both in and outside the theatre to participate in various events by SIRENOS club. These events, taking place in a non-traditional environment, will allow participants to go on creative walks, to take part in a so-called ritual – a silent disco, to watch sketches of two future performances, as well as to dive into a musical performance. According to SIRENOS club artistic programme director, composer Agnė Matulevičiūtė, “this year SIRENOS club, as always, will become a place for outsiders, for conceptual interdisciplinary experiments, in one way or another crossing theatrical borders”.

Keeping in mind this year’s festival motto – Untold stories disappear – creators of this audio guide turn their attention to multicultural environment of Naujoji Vilnia, a district that due to it’s poor reputation has made it’s locations and dwellers unnoticeable or even invisible. Alternative audio guide Unheard Vileika is an acquaintance with Naujoji Vilnia through the eyes of its dwellers. They will help discover hidden charming locations loved by the locals, uncover hidden tokens of the past and find out a very personal story of Naujoji Vilnia through stories of the people helping to develop this district. Audio guide will be available in Naujoji Vilnia since the opening day of the festival on September 15th, during the festival and afterwards. Creative team: Vita Ličytė, Agnė Matulevičiūtė, Justas Levickas, Rasa Kregždaitė.

SIRENOS festival opening event – a musical performance Sonic Fiction, analysing the phenomenon of silence – will take place on September 23rd at 7 p.m. in Arts printing house. In this piece seven musicians of the ensemble Synaesthesis examine the domain of modern musicians that is being broadened by disrupting conservative means of expression via musical instruments – removing them from the stage, forcing to focus on alternative means of expression. Specifically for this audiovisual performance four silence-themed pieces were created by Gintaras Sodeika, Artūras Bumšteinas, Rita Mačiliūnaitė, Agnė Matulevičiūtė. At first, musical part of these pieces looked like simple recorded music tracks, but later on, during the experimental process, it has developed a unique onstage format. To achieve this, a special team of theatre professionals has been brought together (director Kristina Werner, choreographer Greta Grinevičiūtė, lighting artist Julius Kuršis, sound producer Arūnas Zujus). This project is a multidimensional experiment analysing not only music, theatre and performance arts, but also a philosophical research field of music, theatre and performance arts.

This year SIRENOS club also presents an innovative format of an ordinary walk. Special sounwalks created by three sound designers (Dominykas Digimas, Edvinas Kopcevas, Vitalijaus Červiakovas) exclusively for SIRENOS festival encourage to quiet down, listen and look at the surrounding sounds from another angle. Dominykas’ Digimas’ soundwalks in Lazdynų Pelėda park on September 18th and 20th at 7:30 p.m. will offer a chance to interactively experience sound spaces. On September 26th at 11 a.m. and 2 p.m. Edvinas Kopcevas will be waiting at the Draugystė bus stop and will offer to listen to his native, although barely known district of Naujoji Vilnia. On October 2nd and 7th Vitalijus Červiakovas soundwalk Tylėjimai will become a sort of meditation, since this walk in silence in a chosen direction will last from dusk till dawn. All events are free, but advance registration is required.

SIRENOS club programme will continue on October 1st at 7 p.m. and 9 p.m. in a cultural space SODAS 2123 with a performance aimed at a woman’s perspective in a field of stagecraft and visual arts – Žiūrėdama viena į kitą (While looking at each other). It is an attempt to find a way to talk about life as if it was a piece of art and to legitimize oneself, based on particular experiences, as well as on the art and life of a photographer and artist Veronika Šleivytė. Director of the performance – Eglė Švedkauskaitė, artists – Eglė Gabrėnaitė, Elžbieta Latėnaitė, Justina Mykolaitytė.

This year traditional Silent Disco will take place in the evening of October 1st in Lukiškės prison. To participate in this three-hour event one will only need a pair of headphones and the right mood. The event starts at 10 p.m.

Late in the evening (10 p.m.) of October 5th in an intimate setting of Vilnius State Small Theatre spectators will have a chance to take a fresh look at the classic William Shakespeare comedy As You Like It. Together with a team of charismatic actors a young director Uršulė Bartoševičiūtė, one of the brightest representatives of the feminist movement in Lithuanian theatre, will present a fragment of As You Like It, analysing the topics of love, sexuality and physicality, which were equally important to the Renaissance artist himself. Actors taking part in the fragment of a play: Arvydas Dapšys, Indrė Patkauskaitė, Milda Noreikaitė, Agnė Šataitė, Karolis Kasperavičius, Edmundas Mikulskis.

Vilnius International Theatre Festival SIRENOS will take place from September 15th to October 7th. Events of SIRENOS club are free, but advance registration is required. Registration can be completed online, on the following website –  www.sirenos.lt. Tickets to both Lithuanian and international programme events can be purchased on Tiketa and Teatrai.lt platforms.